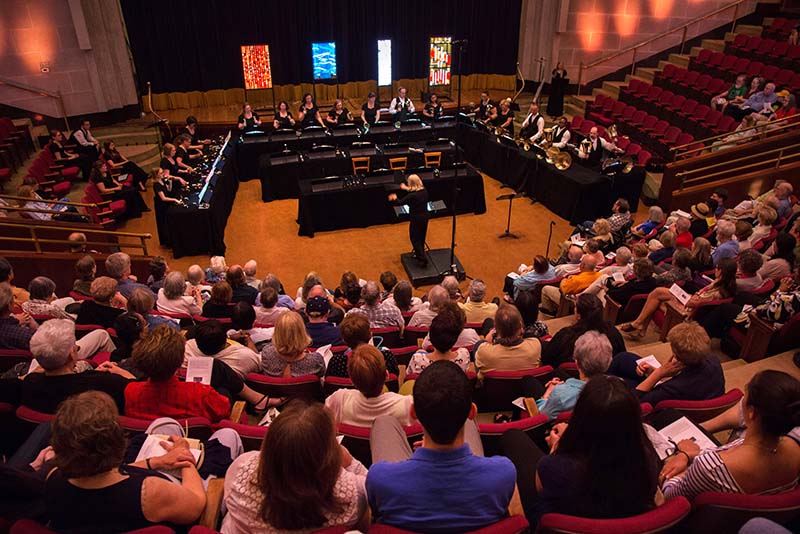 It was a year in the making and an amazing artistic journey!  In June of 2016 I began talks with Virginia Bronze on collaborating for their season finale.  The concert: Mystical and Majestic would be taking place at the George Washington Memorial Masonic Temple in Alexandria Virginia.  Putting any of my music paintings on the stage didn’t seem logistically sound.  How would they bit lit?  How would they be seen from afar?   While attending their concert for thier 2016 season, attempting how we could artistically unify a cohesive sound and visual experience, it came flooding in.  The  clarity and beauty of the bells reminded me of glass. By the concerts’a end,  I was envisioning working on large-scale glass works and providing an interactive light show that would correspond to the music, done live, during the concert.  All was soon set and I set out to learn how to work in both of these new mediums.  Even with this vision and the determination to see it through, I knew nothing about either medium and spent the next months in beginner classes, researching and gathering resources.

Before long the glass was taking shape and things began moving along.

The next work was the Firebird Suite

This is one of my favorite personal pieces.  It’s difficult to represent the extraordinary energy throughout Stravinsky’s work, in any medium, but especially in glass.  In an attempt to capture the fiery rhythm and geometric structure of his finale, I created three glass panels.  The top acts as a structural capstone.  The middle panel presents the first half of the main musical phrasing for the finale, while the lower panel illustrates the answering second half of that melody.

I really love this one and finding the right glass took a long time.  I also had to learn how up my skill level to even pull this off.  The final is over five feet between it’s three panels.

While I was working on this I began my kickstarter campaign to raise the funds neede to finish the glass and get the lighting in house.

Below is a video I made to help raise awareness of our efforts:

Not only did I need stands, but lightboxes as well.  The entire premise needed the lighting behind the glass.  Thanks to Tex Forrest the light boxes were made to order and perfect!

Debussy formulated his Sunken Cathedral on a myth about a great towering cathedral, which on rare, clear, morning sunrises, rises up from the depths of the sea.  Envisioning both the serene, clear beauty of the water with the forced swirling turmoil resulting from the cathedrals rise helped focus my glass choices.  The cathedral itself is placed within the glass as a drawing.

Another lovely aspect of glass is how much it changes one the light is added.

The last work was Great Gate of Kiev

Victor Hartmann’s watercolor exhibit inspired Mussorgsky to create Pictures at an Exhibition.  The Great Gate of Kiev is the final movement of the piece.  The work opens with a towering gong and chimes, moving effortlessly into the main amassed phrasing melody.  Although I only represent this first theme, I decided to imbue the linear structure of each section of the first chordal moments with all the color of their resonance.

The concert was wonderful and recieved a very nice write up by Sue Bowers: http://thezebra.org/britt-conleys-stained-glass-work-shines-at-virginia-bronze-community-handbell-ensemble-concert/

The final Concert took place at the Workhouse Arts Center on the 17th of June, 2017.

I could not have done it without all the support of my kickstarter supporters:

A very special thanks to following wonderful people, who donated to my Kickstarter.  All the art for this project will be able to come to fruition, due to your help. I can’t thank each of you enough. Thankyou sooo much!

As well as a phenomenal team: Tex Forrest, Nathan Devonshyre and Jim Davis.  A special thanks goes out to Jimmy Powers and Weisser Glass for all your support and helpful advice.

Now that the first life of these stained glass have lived, the next is to get them into galleries. I’m currently getting the promised items made and off to the kickstarter family.  I’m also working on the other comission that I have had for some time and working on two new shows happening in the coming months, left in the year : )  More on those in future blog posts.