Sitting in the corner of my foyer are three 4×6 foot paintings that are currently readied for transport to my sister’s place.  She’s storing them for me for a while.  They are all in progress.  This particular work is actually a small 2 ft area of a life size 4×6 ft. portrait of my father.  It is the painting I’ve strategically placed on the wall behind him.  The original was done by my grandfather and the man who taught me everything that mattered to him about creating.  I’ll never forget the moment he pierced into my eyes and said, “You have it”  I knew what he meant and yet it felt like he was actually puncturing me with what ever “it” was, within that look. I’m pretty sure any artistic  talent would have made him jump for joy : )

He’s passed on now and never saw any of my adult work.  He did however mentor me from the earliest age and not with the standard here’s how you do this and that.  He gave me his treasured secrets, concepts ways to see and feel the stroke.  He knew I understood before I did.  He taught me that being fearless was my greatest gift, during the time the world was trying to tame it out of me.  My presence in his studio made him truly happy which makes me honestly smile.  He was one of the great unknown chess players… his brother was world renowned.  He beat his brother all the time but didn’t want to travel the world playing tournaments, he wanted to be a painter.  We’d play chess and checkers all the time.  Chess, cribbage, canasta and checkers were the family games.  Funny how we never played backgammon, which I now love.  He was also card shark.  He taught me all (well, most of them, he was better at math) of his card tricks as well, much to the chagrin of my father.  We were two trouble makers bonding over everything.  There was a lot of winking going on.  One of the cool things about him is that he graduated from Rhode Island School of Design in six months.  They said there was nothing left to teach him.  That doesn’t surprise me at all.  I will never be as good as he was, but I’ll be me and only me and I think he would think that is better.  This is not one of his bolder works but it’s one of the ones I enjoyed and wanted to incorporate the geometrics in with mine for the painting.

He had a really bad habit of taking a knife to all the works he didn’t like and I never understood that until I became a painter.  And low and behold, if it’s not done and can’t be completed… no one is going to see it.  Out of it’s frame it goes and shredded it becomes.  It’s called standards.  Well, anyway, this semi blurry (badly photographed), section of the much larger painting is my homage to him.  I wanted one work with my father sitting in front of his father’s work, painted by his daughter.  I’ll post the image in full when it’s closer to completion. 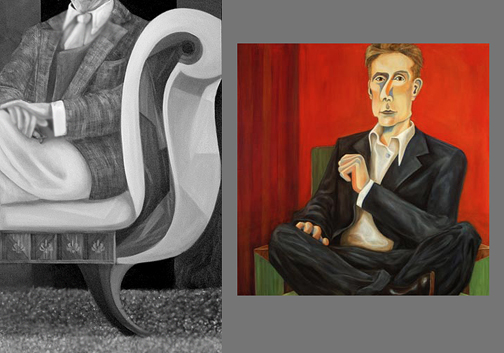 On the left, a crop of my father’s painting.  These are still the early layers and this is a severed crop from the full painting, but, it shows one of my great loves in portraiture: designing furniture and clothes.  I redesigned the actual bench he was sitting on. I’ll be doing the collar next. The one you see with the tie is just a place holder so I know the general reality of the original.  But I like to futz with things and collars are one of those things.  The other is noses : ) The painting to the right of this is of my friend Kevin.  I designed his collar and the chair he sits in as well and I guess his hands and face ; ).  Some day I hope to actually make the furniture I envision and have it in my home.  Well, it’s nearly 4 am and I have to go to work in the morning so there is tonight’s update.  I’m feeling much better by the way.  I think I’m finally settling back down.