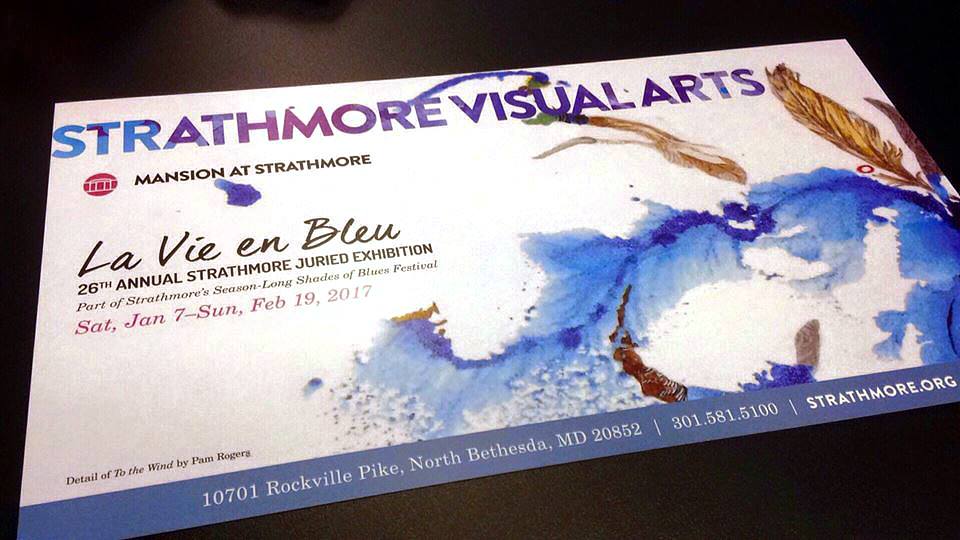 Really enjoyed  the opening reception, on Thursday,  January 5th, 2017, in the Strathmore Mansion at the Strathmore Center for the Arts in North Bethesda.   The show, “La Vie en Bleu” features  the color blue, itself.   The piece that juried in, is titled “Out of the Blue”

The receptoin was wonderful and garnered quite the crowd!  A phenomenal opportunity to meet many Washington area artists.

In 2014, I chose to personify the writing style of Jazz composer and saxophonist, John Kocur, of the John Kocur Quintet.  After months of visually chewing through his writing, I gave him the painting, which he, then, proceeded to write an orignial jazz composition for.  The work premiered in 2014 at the Workhouse Arts Center and can be heard below.  It will be on display at the Strathmore Mansion,  from January 5th-February 19th. 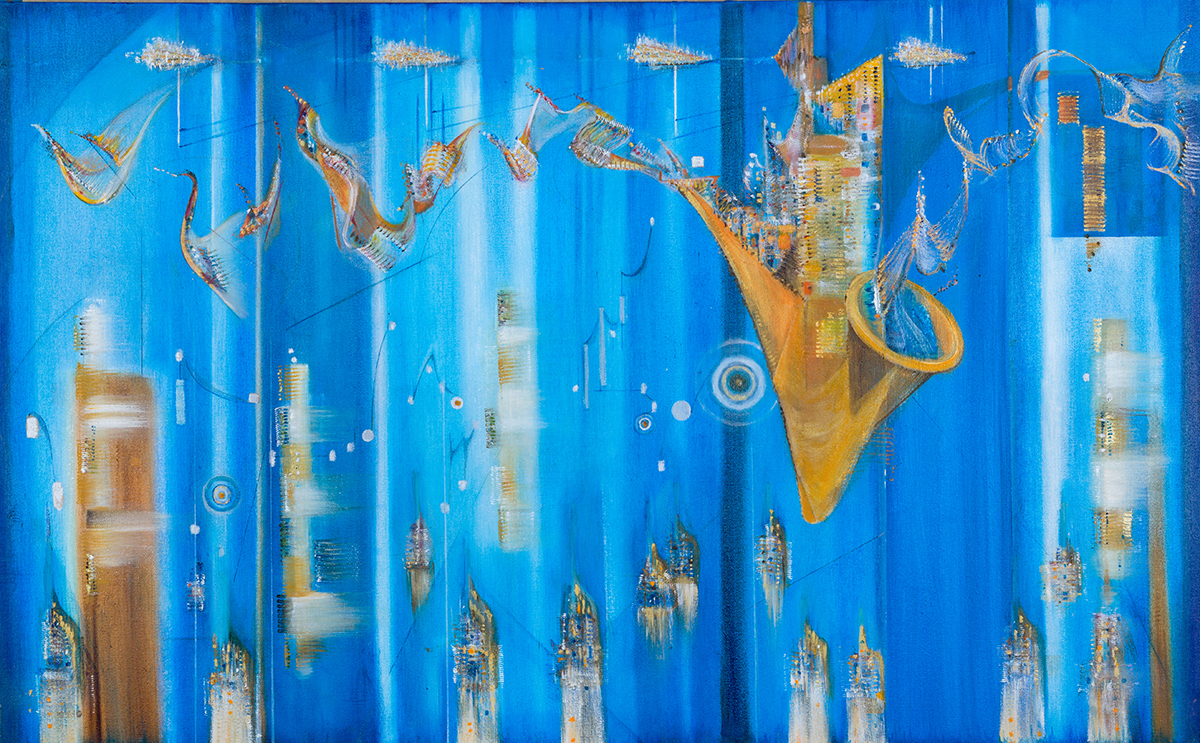 Below holds the audio for John Kocur’s wonderful response: Out of the Blue.

Saxophonist John Kocur’s complex and wonderful writing style gave both he and I, a lot to chew for this collaboration.  What developed from our discussions, was a real appreciation for the individual instrumentation of jazz.  The concept played an integral part of our work within the project.  Since first being introduced to the genre, I’ve loved Jazz, however I hadn’t realized just how removed my understanding had been to its actual structure until John’s series of conversations about how the sax works.  He described in great detail what it’s like to physically play one and what the role the instrument is used for. John was able to effuse on all the magical behind the scenes aspects that only a jazz musician can know.  After listening to him, his music and seeing his quartet live, I began to get a feel for his writing.  One of the interesting aspects of his aural communication with the world is done through articulation.  Literally, one has to press their tongue upon the reed just so, in order to articulate the grammar of stops, starts and nuanced sputterings that are used with creating the saxophone sentence.  These are the vowel vocabulary for shaping the sounds and their dynamics, and rise and fall. The fingerings help choose the notes, but the articulations determine the propulsion, guttural rumblings or smooth nuance that creates the elegance of line or rhythmic cohesion within a passage.  Attempting to capture the nuanced breath of his articulation’s were done by adding a white web across the vocabulary of saxophone line.  The structural shapes themselves, complete with all the little dots and lines, swivels, bursts and topple overs are the physical saxophone articulations.  This saxophone line represents the passages and dynamics leading into the clustering of ensemble itself.  Here the saxophone bursts skyward with sound, reflecting all the brilliant cacophony of the entire ensemble into one moment, before the musical frenzy provocatively stops.  Then, out of the sudden silence, the saxophone begins again, rising up from the end of the horn with a singular song which ribbons upward and to the right before trailing off with its endless song.

The blue background was determined before I’d even worked out what I’d paint.  A sea of rhythm in the Blue  beneath the instrumentation, was envisioned.  To me saxophone is sonorous and resonates into the atmosphere.  I wanted to toggle variations between blues and white in order to create it’s own rhythmic ambiance.

The final composition has a complicated layout.  The blue stripes provide depth and a rhythmic underlayer.  The center has vertical chordal shapes that resonate toward a dissipated duration.   The satellites to these chords are small melodic piano notes.  They respond as their own punctuation to the rhythmic layout.  Below runs the bass line or lower banded chords.  They buttress the piece skyward.  Above everything lye four white clusters that triangulate forward.  They are the jazz “Swwwwip, …… Swwwwwip,  ….. Swwwwwip, …..Swwwwwip” of the classic jazz high hat cymbal closing.

Now, that said, I’ve put so much visual information within the work so that John would be able to pick and choose what he wanted, including what each visual item represents.  He was free to interpret as he wished.   He could have written the entire piece on the contrast between orange and blue or taken each item in for consideration in a particular layout order.  It was up to him to be inspired as he wished.  My intentions were not meant to be the intentions of the composers, but only visual inspiration for them and from them.

To hear more about his creative process with the painting, click on the link above.

This image is from the original reception at the Workhouse Arts Center in 2014.

A while back, a friend stopped by and pointed out the importance of keeping…

Well, after a few years and a lot of drawing, much that was never posted,…

In and of Itself

As mentioned previously, I'm working on numerous projects right now.  One of which is simple…

Visualizing Music
My interests are in visualizing the physics of music, musicality itself, composers thought processes and what orchestration looks like, the physicality of performance, sounds, essentially, all things musically related. My art is more about the integral thought processes and physical nuances that unique musical performance and authorship, brings. My visual music it meant to expand peoples ideas about art and music experience. Visualizing conceptual considerations of music has always been a preoccupation of mine. I spent my youth at the foot of my mother's piano jumping around, trying to catch all the colors that would emerge from the air, as she played her favorite pieces. I didn't realize until much later that I have synesthesia. I see color and feel touch when I hear sounds, especially musical ones. One of the many joys of having a public studio is the rare chance to meet other synesthetes who immediately ask me if I have synesthesia after seeing the art.
Copyright Britt Conley 2023 - All Rights Reserved
Back To Top