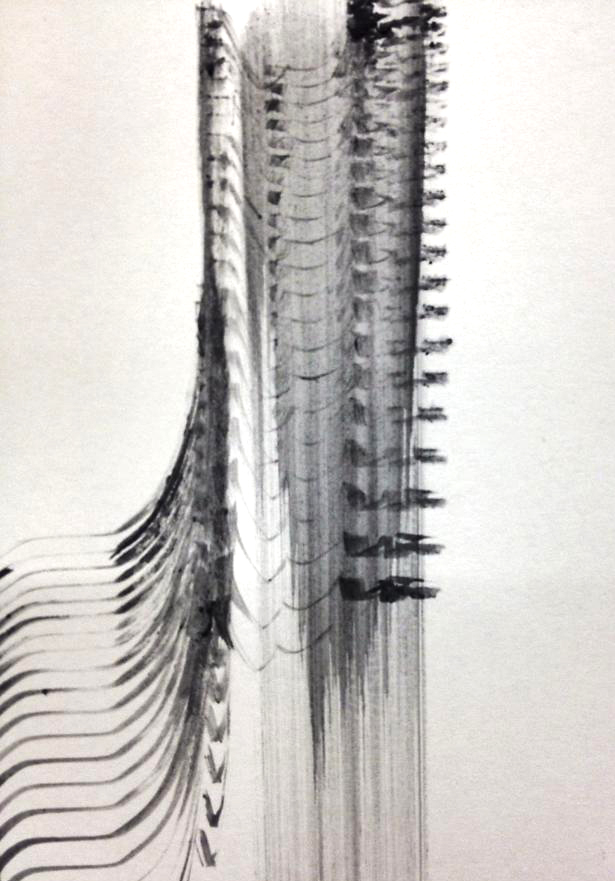 A wonderful man popped by the studio this weekend asking numerous questions about my visualization structures which prompted an immediate delving discussion on sound-shapes, physics, aesthetics and all that we are exploring in common.  Before wrapping up, he added that he wasn’t leaving without one of the works.  At that point, I realized, I didn’t have that many works left to sell!  We wandered over to the few remaining graphite works and he happily chose my personification of the Duke Ellington Orchestra.   Only one remains from that series.  Unfortunately, I don’t have a scan of the work!  The digital age provides many a pit-fall if one does not back up ones files on a regular basis.

On the plus side, it means I’m busy as a bee working on filling the studio with an entirely new series for the next solo August, 8th show at the Workhouse Art’s Center.

All new vocabulary of musical constructs, complete with the usual ridiculous attention to detail…

The current project involves a new vocabulary imbued with musical mark-making that at no point overtly symbolize standard music symbolism.  Instead it addresses the complexities and nuance of music and it’s textural layered structure and relational aesthetic movement.

Much to do… The one below gets it’s own coloring and complexities.  Still far from done.

For this new show, I’m adding a new ceramic element to be displayed between paper works. These are my very first attempts at sculpture.  I’m rather enjoying the process. I hurt may hand in January and was unable to throw this entire time, which forced me to continue the semester’s ceramic class with hand-building.  After numerous hand-built bowls and plates, sculpture evolved out of mental necessity.  Once there, I was hooked.  These are not the best color images, but they serve to show the upcoming pieces.

Quite a few sets to carry the same musicaly-structured theme.

There are months of work ahead followed by a good week of framing.  If all goes well, this too, shall be a success :)  Either way, it’s onto the next thing… as art often goes.  My hope is to make each show a unique time-based artistic endeavor.  This way, I can continue to evolve and creatively explore entirely new aspects of musicality.

If you are interested in stopping by the studio.  I reside in building 6, studio 608C at the Workhouse Arts Center in Lorton, VA, just off I-95.  My daytime hours are mostly on the weekends.

Visualizing Music
My interests are in visualizing the physics of music, musicality itself, composers thought processes and what orchestration looks like, the physicality of performance, sounds, essentially, all things musically related. My art is more about the integral thought processes and physical nuances that unique musical performance and authorship, brings. My visual music it meant to expand peoples ideas about art and music experience. Visualizing conceptual considerations of music has always been a preoccupation of mine. I spent my youth at the foot of my mother's piano jumping around, trying to catch all the colors that would emerge from the air, as she played her favorite pieces. I didn't realize until much later that I have synesthesia. I see color and feel touch when I hear sounds, especially musical ones. One of the many joys of having a public studio is the rare chance to meet other synesthetes who immediately ask me if I have synesthesia after seeing the art.
Copyright Britt Conley 2023 - All Rights Reserved
Back To Top